Wonder Woman is one of the most recognizable superheroes out there. From her classic red white and blue suit to her updated, armor like new suits, it’s safe to say her look is iconic! She’s appeared on screen in live-action films and TV shows multiple times since the 60’s. With so many decades and appearances, her costume is bound to change a little. We’ve created a handy infographic of live-action Wonder Woman costumes through the years! Read on below for more detailed information about all the costumes.

Wonder Woman Costumes Through the Years

The first on screen appearance of Wonder Woman was actually a four-minute test segment that failed miserably. 1967’s Who’s Afraid of Diana Prince was created to create interest in a Wonder Woman TV show. The clip features Ellie Wood Walker as Diana Prince. Once she turns into Wonder Woman, she admires herself in the mirror, with her reflection played by Linda Harrison. This version of Wonder Woman features her original ‘Golden Age‘ suits from the 1940’s. The segment didn’t generate enough interest and the TV show was scrapped.

Cathy Lee Crosby played Wonder Woman in a made for TV movie, also meant to gauge interest in a TV show. In this version, Diana ditches the traditional Star Spangled shorts and bustier for a more athletic look. Although the movie did not do too well, it paved the way for the famous TV show starring Lynda Carter.

Lynda Carter is definitely the most famous Wonder Woman of all time and not just because she’s the first to actually get a show. Her red and gold corset and star covered briefs make up one of Wonder Woman’s most recognizable outfits. Her iconic looks don’t stop there. Throughout the show she’s known to wear lots of head turning costumes. 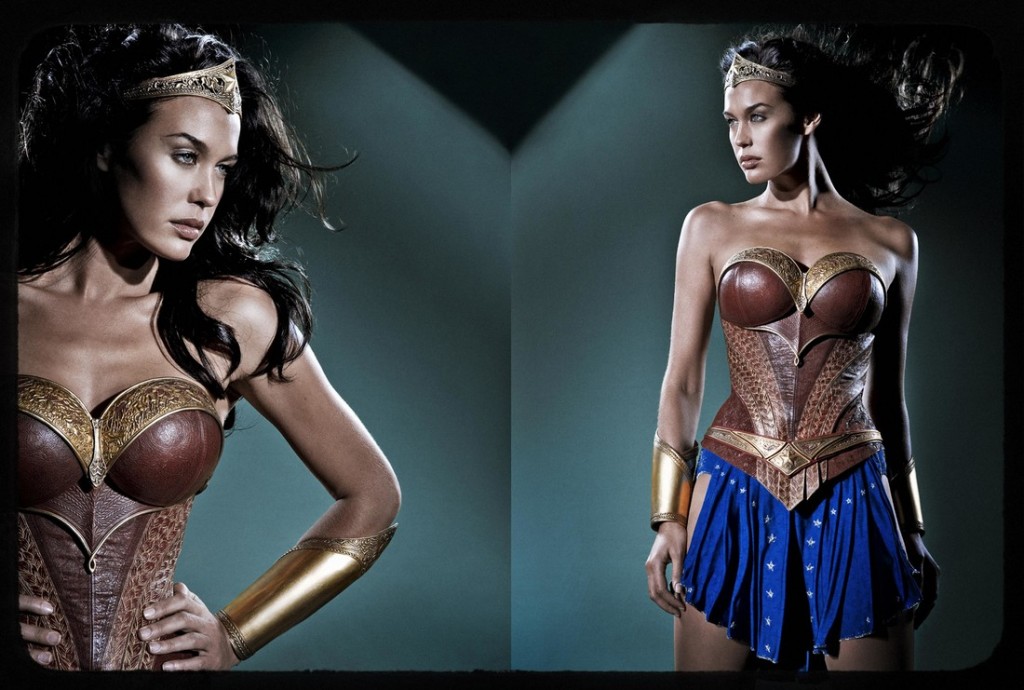 George Miller’s Justice League: Mortal would have been the first to feature Wonder Woman on the big screen. The movie was well under way and even had a full cast when a myriad of complications, including the 2007/2008 writer’s strike, lead to the cancellation of the movie. Though we never got to see Megan Gale in action as Wonder Woman, photographer  Mark Rogers did give us a taste of what it would have looked like when he released promotional photos of Gale in full costume in 2015. Comparable to Gal Gadot’s costume, this look was grittier and darker than the Wonder Woman costumes of the past.

2011 was full of buzz surrounding the upcoming Wonder Woman TV show reboot. The costume’s first images and leaked set images, excited fans to see Diana Prince on screen again. In this version, Diana kept her signature red corset but this time she wore pants! This was a big change from her usual swimsuit-like costume. It caused a lot of buzz among fans. With all the buzz, it was a shock when the pilot never aired and the show was cancelled before it began. However, fans still did get to see this costume in action when actress Erica Durance donned the outfit to play the part of a woman who thought she Wonder Woman on the TV show Harry’s Law.

After decades of multiple Batman and Superman movies, Wonder Woman was finally given her own live-action movie. Her new costume turned her classic red white and blue outfit into an armored battle suit fitting for the Ancient Greece style island she comes from. The first movie also gave us a look at what she wore before making the transformation from Diana to Wonder Woman. Her gladiator style armor was perfect for the princess of Themyscira.

The first images from the sequel, Wonder Woman 1984, introduced us to her cool, new armor. This all gold look, known in the comics as the Golden Eagle Armor, is something we have never seen on screen before! With this amazing, new look appearing in the movie, the fans are excited!

Whichever of these Wonder Woman costumes is your favorite, we can all agree Diana has a pretty epic closet. In addition to her classic, star covered uniform, she’s got a lot of variations that anyone would like. Diana has definitely earned her place on the Best Dressed Superheroes list!