When people talk about X-Men characters, they usually source members of the “A-team” – Storm, Professor X, Wolverine, Cyclops, Jean Grey, etc. However, there are plenty other members of the X-Men who have helped save the day more than a few times. Unfortunately, their praise is short-lived and those characters get ignored in the next chapters. These mutants don’t necessarily need to have their own titles or solo films, but they do deserve some recognition. With that in mind, here’s our top 10 list of the most underrated X-Men characters. 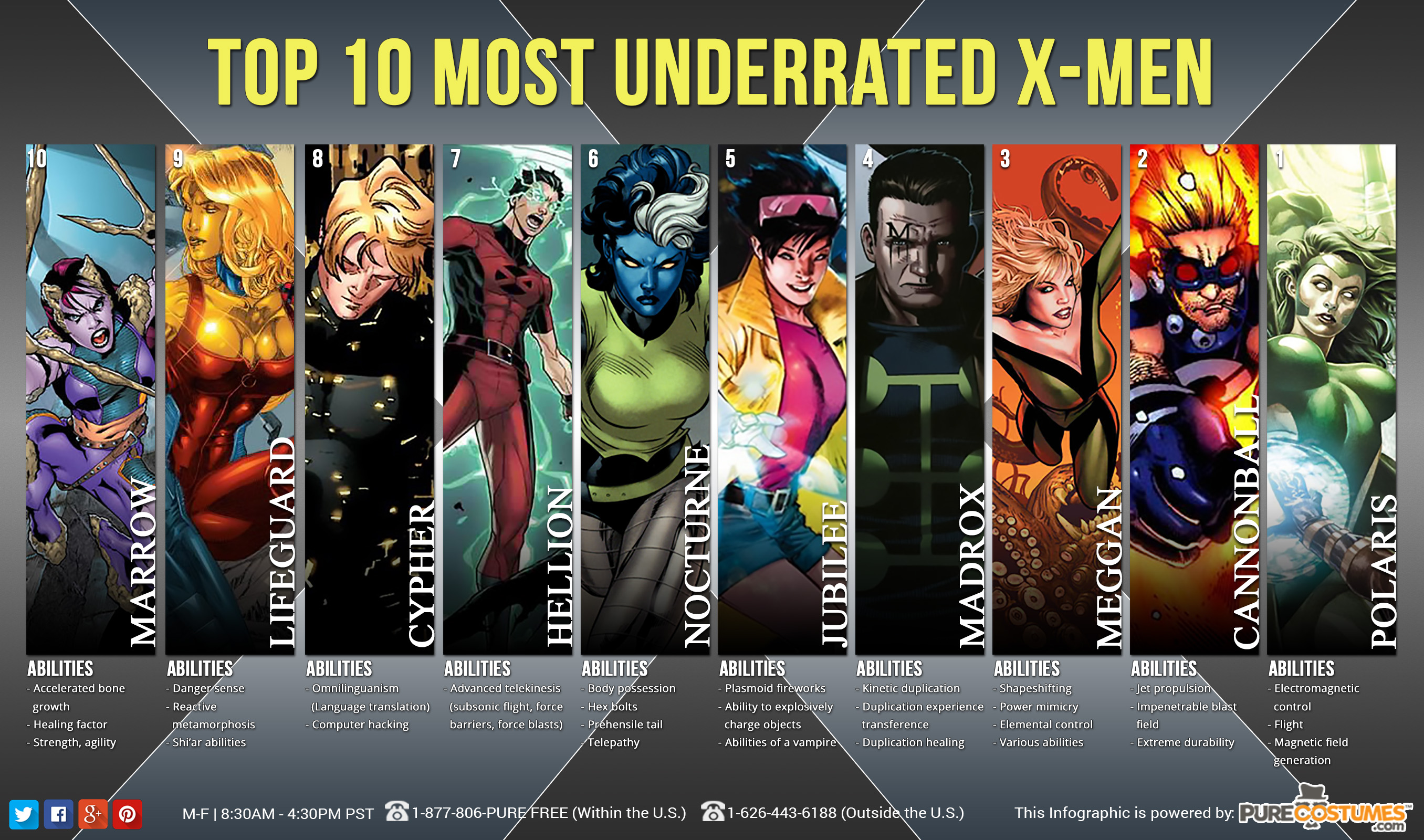 Marrow has had a long history with the X-Men. She was formerly a member of the Morlocks, long-time enemies of the X-Men, until she switched sides and helped the heroes save the day. Her power allows her body to grow bones out of her skin randomly, something which she has no control of. This made her look grotesque and unappealing, but her brash personality still shines through – making her an interesting character to look forward to in every chapter.

Lifeguard is basically a survivor in every way. Her powers let her adapt to any situation that she’s in. If she falls off a cliff, she grows wings; if she’s underwater, she grows gills and a mermaid tail. This might seem overpowered to the point of being boring to some, but I’m sure that with the right story, Lifeguard has the potential to be a great hero.

Having the power to understand any language in the universe might seem lame at first, compared to other members who are capable of reading minds and shooting lasers out of their eyes. But Cypher doesn’t need to be a fighter to be a part of the X-Men. Having someone on your team who can understand alien language can be a life-saver when you’re traveling to other planets. He’s also an excellent hacker and capable of reading the body language of any person, both skills that he’s made great use of in his appearances in the comics.

Think of any power related to telekinesis and you can be sure that this guy has it. He can fly to subsonic speeds, create force barriers, and tear buildings in half with his mind. Come to think of it, he’s a pretty powerful guy. Sure this power makes him cocky and contributes to his superiority complex, but if you’re fighting against powerful beings, you’re going to need a guy that can pack a mean punch.

Time travel and alternative realities are both a staple of comics. Even when it gets confusing, I’m actually ok with that. These methods brought us Cable (one of the coolest heroes ever), and this mutant – Nocturne. She’s the daughter of Nightcrawler and Scarlet Witch, and she can kick butt, making her all the more cooler in my book.

Look at any lists of useless mutants, and more than likely you’ll find her on that list. This is quite unfortunate since she’s one of the best X-Men in the animated series even if her powers are basically just harmless fireworks. Her positive personality and retro outfit is a welcome addition in the X-Men movies, which is why I’m looking forward to seeing her debut in X-Men: Apocalypse. Plus now that she has vampire powers in the comics, she just got a whole lot more interesting.

Another former villain that turned good, Jamie Madrox doesn’t seem to get a lot of love unlike most characters. His power to make multiple clones using kinetic energy may seem weird, but how he uses these abilities makes him an awesome X-Men member. His rich history along with his strange ability can make for some great storylines. That is, if he ever gets a chance.

Even with a whole list of powers, no one is safe from being forgotten in the myriads of mutants that have joined the X-Men. Meggan is one of such incidences. Her powers, including shape-shifting and the ability to manipulate elements, make for some pretty compelling storylines but due to the ever growing list of mutants, she gets relegated to the sidelines and left in the background.

Canonball is a superhero at heart. He just has that type of charm that would make anyone want to hang out with him. His humble origins and his mild mannered attitude make him a great superhero amidst all the powerful members of the X-men. It also helps that he has a powerful ability to boot – being able to fly as fast as a jet and create an impenetrable blast field. No wonder the Avengers decided to add him to their team.

Everyone knows Magneto’s twins – Quicksilver and Scarlet Witch. Heck even the movies have different versions of them. But everyone often forgets that Magneto has a third child, one that inherited the same powers as him. That child is Polaris. What’s great about her is that despite her father being an all around super-villain, she’s still a good guy (or girl) who wants to help the X-Men in saving the day. Hopefully now that Quicksilver and Scarlet Witch have been introduced in the films, Polaris can follow suit and make her own debut soon.

Which X-Men character do you think belongs on this list? Let us know by commenting below!