American history is a popular subject during the month of February thanks to President’s Day. In fact, my son just had a presentation on Abraham Lincoln the other day where he had to dress up like him and talk about his life. I’m sure plenty of parents are finding themselves in need of some sort of historical costume as well. That’s why today, I wanted to share some great costume ideas for popular historical figures in case you are in a jam and need help finding something for your child! 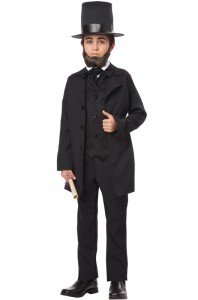 As I mentioned, my son dressed up as Abraham Lincoln and I used this costume featured above. I liked that the top was one piece and easy for my eight-year old son to put on by himself. I added a white button up shirt and black pants to complete the outfit and finished off the look with a beard (here). This outfit was great for helping my son get into character! 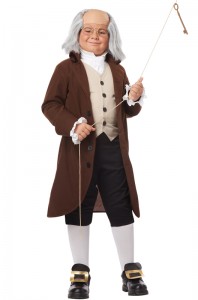 Although not an American president, Benjamin Franklin is a very popular historical figure. He was a man of many inventions and was very influential in sculpting our country’s ideals as one of the founding fathers. His look is extremely distinct and I think that this costume captures it so perfectly. What’s so great about this costume is that it includes knickers which are pretty hard to find living in the 21st century if you ask me. Don’t forget to complete the look with the wig (here). 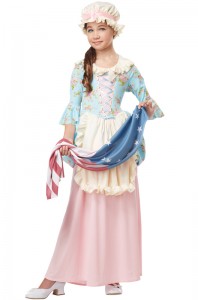 Betsy Ross is one of the most popular female icons of American history and is often the subject of a school presentation. If your child has been assigned to present as her, I would recommend this costume above. It has such a pretty and elegant pattern and a mob cap which is so 1700’s! 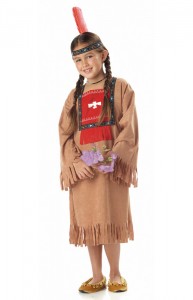 Another interesting and important woman in American history is Sacagawea. She was a Native American most famously known for joining the Lewis and Clark Expedition as an interpreter. I think that this costume captures her look well and would be an excellent addition to your child’s presentation. Plus, at the price of $14.95, it’s quite affordable.

I hoped that these costume ideas helped you in your search for the perfect school presentation outfit. Does your child have to dress up like a historical figure this month? If so, let us know who they will be presenting on by leaving us a comment below!