California is filled with a rich and diverse history, but it wasn’t until the Gold Rush of the 1800s that it truly began to be a part of US history. The Homestead Museum is situated City of Industry, California, located about 20 miles away from Downtown Los Angeles. The Homestead was occupied by the Temple and Workman and families who built their fortune through agriculture during the 1840s. It was later passed down to his grandson who had overseen the land from the 1920s through the 1930s. The Homestead Museum preserves the memories of that time period through education and displays of architecture.

Currently, the Homestead Museum is a California State Historic Landmark that is open to the public for tours and events. At the end of the month, they are hosting a Victorian Fair from April 30-May 1. It’s a free event for the whole family where you can attend in Victorian costume and experience what life was like back in those times. Here are some of the interesting activities you can expect at the event: 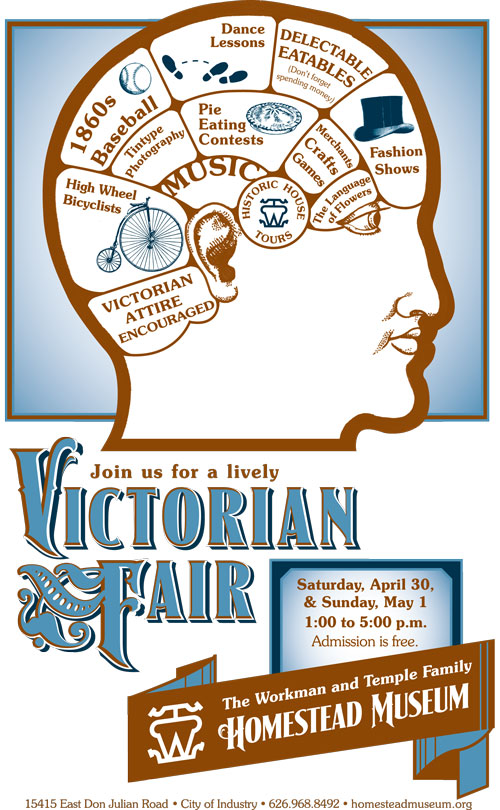 Learn the Language of Flowers. During the Victorian period, people were bound to rules of etiquette and could not always discuss certain things with one another, especially in the arena of love. It became very common for people to send messages through flowers. Not only did flowers hold different meanings, they way they were arranged can convey an entirely different message.

See a Victorian Fashion Show. The Victorian Era spans for almost an entire century and fashion can change quite dramatically during that time. Learn how fashion trends evolved during the course of several decades.

1860s Baseball. Formed as a hybrid between cricket and rounders, baseball is believed to have begun sometime in the mid-1800s. As the game picked up through the years, national baseball clubs began forming right around the time of the Civil War, thus ushering in America’s favorite pastime.

Dance Lessons. Learn the hottest dance moves of the 1800s, the Polka and Waltz.

House Tour. If you have yet to take a tour of the Homestead property, now is your chance! The site is offering free tours so you can see the architectural changes made throughout the years.

There are plenty of other things to enjoy at the fair including tintype photography, hand-cranked sewing machines, and even a pie-eating contest. If you’re in the Los Angeles area and you’re interested in learning about the history of the area, this is one event you won’t want to miss.