HBO’s hit show Game of Thrones wrapped up its fourth season on Sunday, June 15. This season finale wasn’t without its share of twists, turns, and surprises. In fact, it was one of the most talked about TV shows on social media. This comes as no surprise since Game of Thrones (here) is the most popular show on the cable network.

Just because the show is over doesn’t mean that fans will stop talking about it. Women have been using the show as inspiration when it comes to beauty and fashion. Countless beauty bloggers and YouTube stars have given tutorials on the popular braided hairstyles (here), as seen on Cersei Lannister and Daenerys Targaryen.

The costumes on the show are not just worn to portray a certain time. The costumes also give a clue into a character’s evolution. Michele Carragher stitches the show’s intricate embroidery. The embroidery is used to tell a story about each character.

Michele Clapton is the Emmy-winning costume designer. She asked friend Carragher to collaborate with her on the costumes for the fourth season. Clapton says about Carragher’s work: “The embroidery is a subliminal way to tell someone’s story.”

For example, the beading on Princess Sansa Stark’s gown during her wedding to Tyrion Lannister in season three of the series The embroidery gave fans a glimpse into her poor life, including her family and her new husband’s lives. 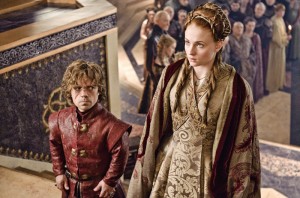 Carragher spent 14 days stitching the wedding gown. She explained the work process: “You can see the influence of her mother, Catelyn Stark (Michelle Fairley), in the House of Tully fish that swim around her body, then the emergence of the Stark Direwolf and eventually the heavy stamp of the Lannister lion on the back of her neck.”

Carragher certainly knows how to tell a story in her stitching. She has 15 years of experience working in film and television. She always had a passion for using intricate details such as pearls, shells, buttons, exotic stones, Swarovski crystals, feathers, and leather. Carragher performs most of her hand embroidery on sheer organza or silk crepe. Her work is later transferred onto each costume.

Clapton says about Carragher’s work: Lots of people can do stitches, but it’s really about the blend of her artistic skills and creativeness. And she is so quick and fluid.”

Carragher rarely makes duplicates because of the time it takes to stitch just one costume. On a rare occasion when a stunt double is needed, Carragher has to quickly stitch embroidery for an additional costume.

Diehard fans won’t miss out on all those little details that Carragher stitches together. Clapton believes that they pick up on the detailed costumes during those shocking and sometimes gruesome scenes. “People watch TV on screens the size of a movie screen now. And devoted fans watch episodes over and over. After three or four viewings, you start to see these details. And that’s why we do it. That’s what makes Game of Thrones special.”