Here in the US, we know Mardi Gras as a jazzy, rambunctious celebration that occurs annually in New Orleans, but did you know that it is also widely celebrated around the world? Mardi Gras has its roots in the Catholic religion and because of its global reach spanning Europe to the US to South America in the earliest parts of history, the tradition of Mardi Gras has spread to many nations and cultures. Various adaptations of the holiday make each celebration unique to its region and to share this knowledge, we’ve created a fun infographic just for you! Check out our chart which shows some of the biggest Mardi Gras celebrations across the globe. 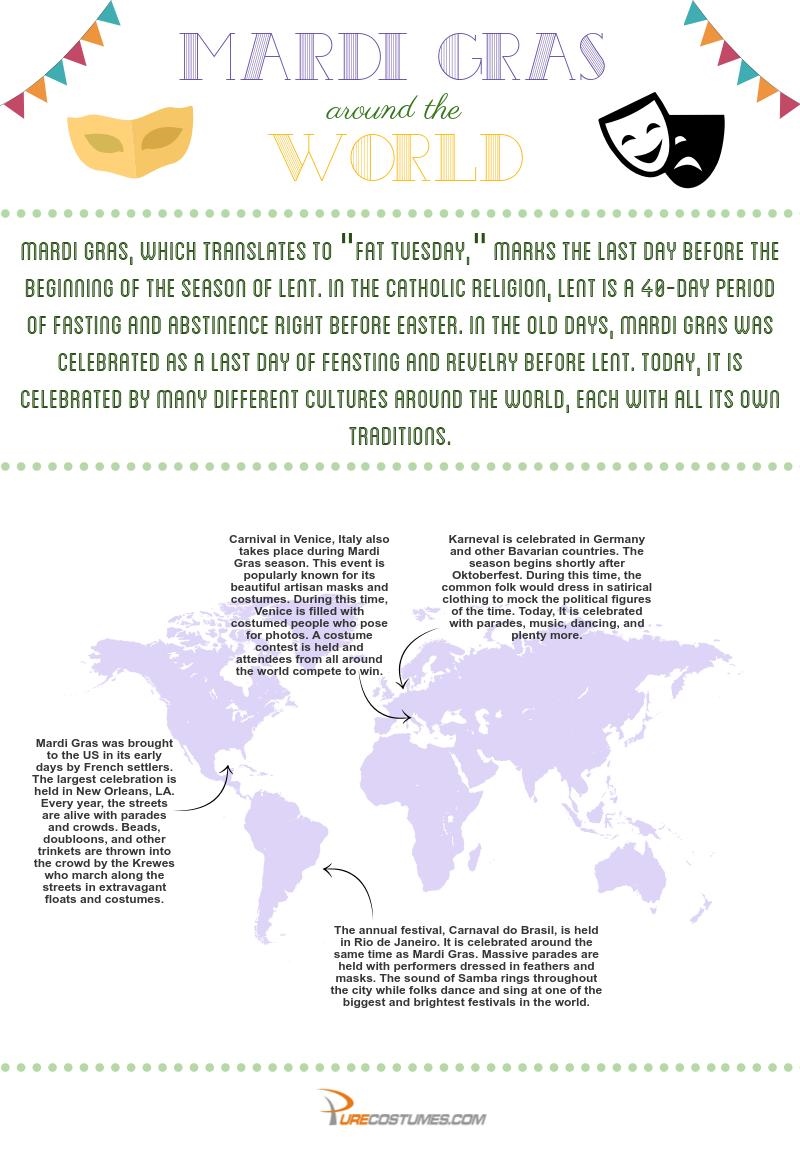 Let’s start with the history of Mardi Gras. As I mentioned, Mardi Gras has roots in the Catholic religion. In conjunction with its other holidays, Mardi Gras is part of a series of religious holidays that span from Christmas to Easter. It begins with Christmas as the birth of Jesus. Twelve days following December 24 is the Epiphany which marks the day when the three wisemen first saw Jesus. This is also known as Three King’s Day which marks the official beginning of the Mardi Gras season. The Mardi Gras season lasts until the Tuesday before Ash Wednesday which is the beginning of the Lent season. The Lent season is a time of fasting and abstinence which is done in remembrance of the 40 days leading up to the death and resurrection of Christ. Thus Mardi Gras, which translates to Fat Tuesday, is a day of revelry and feasting before the solemn occasion. Mardi Gras is like the last day to get your kicks before you give up your “earthly desires.” Although rooted in religious context, today it has more cultural significance than anything else.

In New Orleans, LA, Mardi Gras is the biggest holiday of the year. Visitors come from around the world to witness the legendary parades and partake in notorious revelry. Brought to the region by early French settlers, Mardi Gras has been celebrated here since the late 1600s. Today, Mardi Gras in NOLA is celebrated with grand parades, masks of purple, green and gold, King Cake, and jazz music. In addition, the French Quarter, becomes a stronghold for drunken partygoers where anything goes – very much in the spirit of Mardi Gras.

In Rio de Janeiro, one of the biggest celebrations in the entire world takes place. The Carnaval do Brasil is a flamboyant celebration with enormous parade floats, elaborately dressed dancers, and festive Samba music. In addition to the wonderful parades, there are costume balls, street parties, and so much more.

In other parts of Latin America, Three King’s Day is more widely celebrated. As I mentioned above, Three King’s Day marks the day when the three wisemen first met Jesus as an infant. Similar to King Cake, in Mexico and South America, they feast upon Rosca de Reyes which is sweet bread in the shape of a crown. (Also comes with plastic baby toy!) This holiday also has traditions of its own including lining up shoes outside of the door so that the “wisemen” can leave presents inside. A feast often completes the day’s festivities.

Over in Venice, Italy, masquerading takes to a whole new level. Thousands of tourists come to see the incredible masks and costuming that makes this area famous. In the earliest days of the Carnival celebration in Italy, the mask gave the wearer anonymity giving them a certain kind of freedom. It also broke down social barriers allowing the rich and the poor to mingle. Today, Venice celebrates with masks and costumes, street performers, parades, and masquerade balls.

In Germany, the Karneval season begins shortly after Oktoberfest, specifically on November 11. There are three different names for Mardi Gras in Germany (Karneval, Fasching, and Fastnacht) which specify the celebration by region. Some of the traditions involve political satire in the form of skits, costuming, and the election of mock officials. In addition, there are parades, masks, and costume balls.

Now that you know a little more about Mardi Gras around the world, don’t you think it’s time to join the fun? There are plenty of Mardi Gras events, large and small, all around the country that pay tribute to these cultural celebrations. Find one near you and share with us your experience by leaving us a comment below!