Here in the US, Halloween is a REALLY big deal. That’s why it’s pretty surprising to know that it’s not so widely celebrated around the world. That’s not to say that other cultures do not have their own celebration of the dead. We’ve created a fun little infographic to show you how other cultures celebrate the dead and how ours compares. We’ll also be diving into the history of how these holidays came to be to give a little more understanding into the whys and hows. 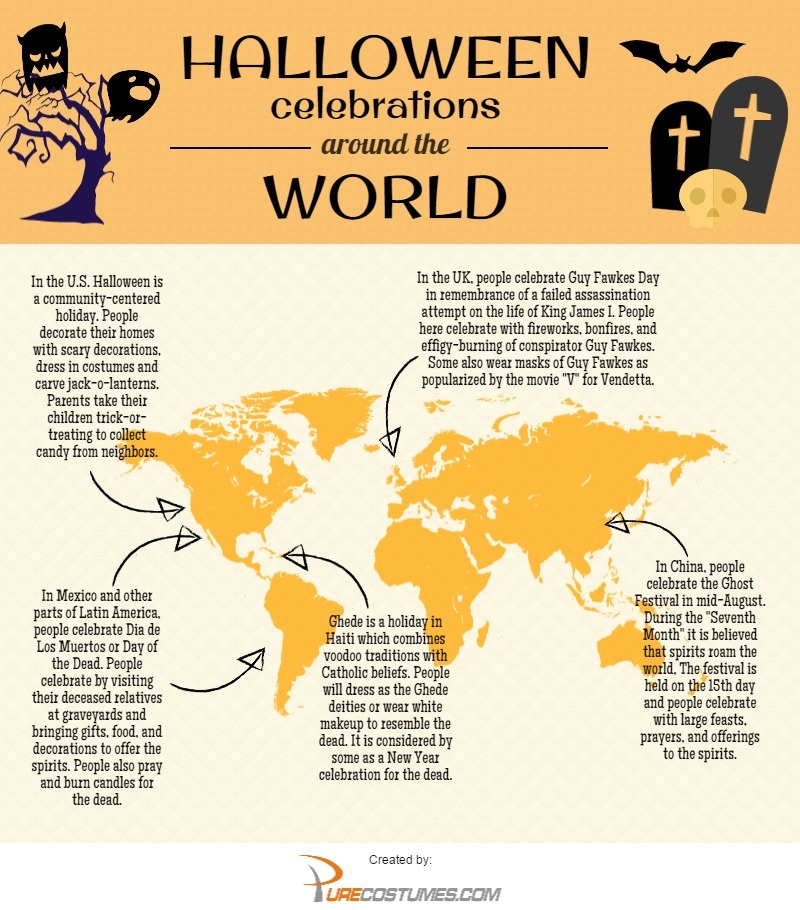 We’ve learned a lot creating this post regarding how cultures perceive death and how religion comes into play. Many of the traditions and beliefs have been passed down for many centuries, long before our modern age. One of the things that we noticed is how many of these celebrations occur in the fall. In the olden days, the changing of the seasons from a warm and lively summer to a dreary, cold winter was commonly believed to be caused by spirits of the underworld which explains why many of the celebrations occur during the fall. Furthermore, you’ll learn as you read on the role that Christianity, (particularly influenced by the Catholic religion), has been a major influence in how the timing of when these holidays are celebrated. With that being said, let’s start with our hometown and take a look at how we celebrate Halloween in America.

Halloween in the United States
As we covered in our previous post (here), the history of Halloween in the US can be traced back to Samhain, an ancient Celtic celebration of the dead which took place on the first of November. When the Catholic state of Rome overtook the Celtic region which spans from Ireland to other parts of the UK, it brought along its traditions which included All Saint’s Day, a holiday dedicated to remembering the saints. The two eventually fused to become one holiday known today as Halloween here in America. As traditions traveled through England and later to America, many of the Samhain customs came along including the wearing of costumes and jack-o-lanterns which were done to deter ghosts. The practice of trick-or-treating takes its roots from guising which began in during the medieval times. It consisted of children visiting neighbors in costume and receiving food and sometimes money in exchange for singing or dancing. Today, Halloween has dropped many of the religious associations and become a secular community activity of pranks, horror, candy and fun.

Ghede in Haiti
In Haiti where Catholicism melds with voodoo traditions, a unique celebration called Ghede takes place concurrent with All Saint’s Day. The Ghedes are a set of spirits which are associated with death and fertility, each playing a different role in the process. Of the Ghede, the most popular figure is Baron Samedi who is depicted with a white, skeleton-like face, top hat, and long-tail tuxedo. His likeness has been seen across pop culture including a James Bond film and the villain in Disney’s The Princess and the Frog. During the Ghede celebration, people will dress as these spirits and paint their faces white. Loud parties and celebrations are held along with other All Saint’s Day traditions like alter-building, feasts and prayers.

Ghost Festival in China
In China, the seventh month of the lunar calendar is recognized as the Ghost Month. During the Ghost Month, it is believed that the spirits return to the Earth. Unfortunate and mysterious events that occur during this time are often attributed to this phenomenon. The 15th day of the Ghost Month is regarded as Ghost Day and a festival is held to worship ancestors who have passed away. This day is celebrated with big meals, prayers, offerings and other rituals.

Guy Fawkes Day in England
After the Protestant reformation, All Saint’s Day and Halloween had lost popularity. Under the rule of Protestant monarchies, England attitudes towards Catholics were quite unpleasant. Many of them were persecuted which led to the rise of Catholic rebel groups who sought to protect their religious beliefs. None was more famous than Guy Fawkes who, along with others, planned an assassination attempt on the life of King James I and the rest of the Parliament by way of gunpowder explosion. On November 5, 1605, the attempt had failed was Guy Fawkes was famously captured along with others to be later executed. The Parliament later declared it a day of thanksgiving and people celebrated with bonfires to burn effigies of Fawkes, fireworks, and parades which still happens today. Children have a tradition of asking for a “penny for the guy” which is similar to trick-or-treating. Various rhymes were also made and chanted during this day. Today, Guy Fawkes is regarded by some as a revolutionary hero due in part to the novel and movie “V” for Vendetta whose hero was known to wear a Guy Fawkes mask.

We hope that you found this information useful and interesting. If you know of another cultural celebration similar to Halloween, please feel free to share it with us by leaving us a comment!