When I realized we would be celebrating my daughter’s birthday in quarantine, I wanted to make sure to give my daughter a fun party. I didn’t want her to feel like she was lacking for anything even though she wouldn’t be able to celebrate with her friends and her extended family as she normally would. However, being that she would just be celebrating at home with just me, my husband, and my son, I also didn’t want to spend too much money on the party. So I had to come up with a way to make her party look as grand as possible without breaking the bank. So here’s my ideas for a low budget quarantined birthday party.

First thing’s first, always start with a theme. I chose a unicorn theme not only because my daughter loves unicorns, but we also have tons of unicorn things in her room and around the house that I could use as decorations. So my suggestion is to look around your house and see what you have the most of and go off of that. You don’t even have to do a specific theme but just go with prominent colors you have around your house or in your child’s room.

The first thing I did was go through my entire house to look for anything unicorn, rainbow, or pastel colored to use as decoration. We had books, stuffed animals, toys, vases, and other unicorn accessories that I was able to pull together. 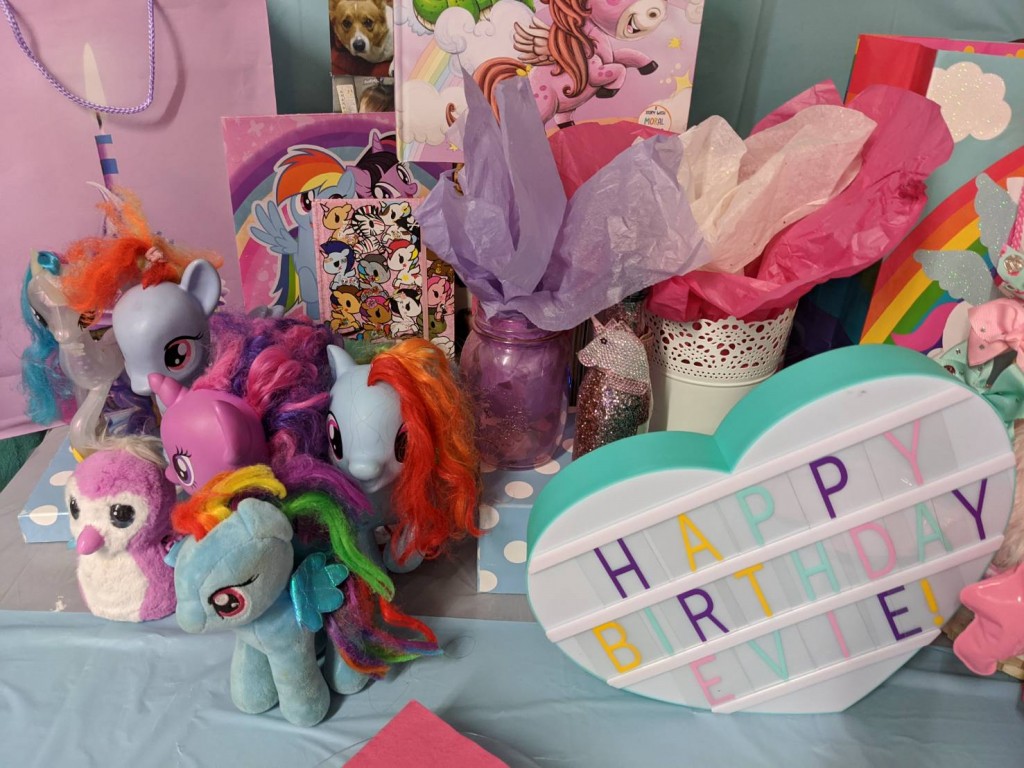 Before the party, I told my friends and family ahead of time that the theme of our party was unicorns because my daughter is obsessed with unicorns at the moment. So (don’t judge, but) when they dropped off presents for her a few days before the party, I peeked inside all the presents and if the gift was anything unicorn, I let her open her present the night before her party. It turned out to only be one unicorn themed present, but it was still something for me to add to her decorations. Also, a few of the gift bags had unicorns on them or were pastel so I made sure to feature those gifts more prominently on the table and I hid the non-themed presents behind those. 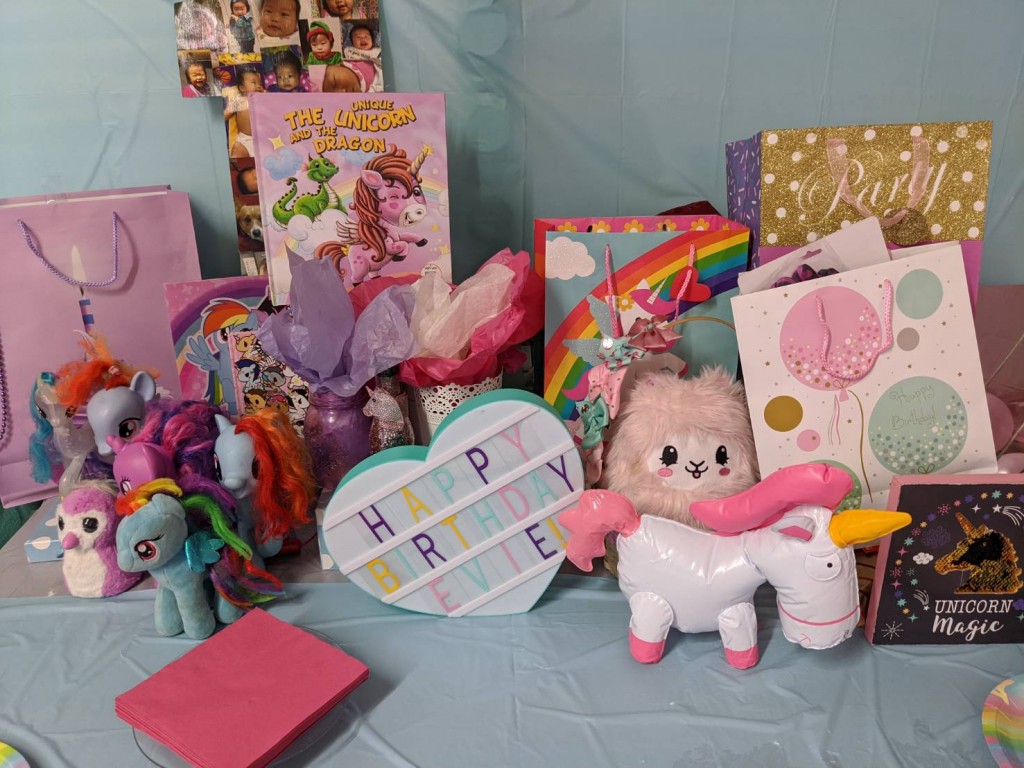 I still wanted to buy some decorations so that I could completely transform my apartment into a fairy tale world for my daughter so when I had to buy groceries, I went to Walmart and bought some decorations at the same time. I bought two banners, streamers, plates, napkins, and plastic table cloths to complete the main table. 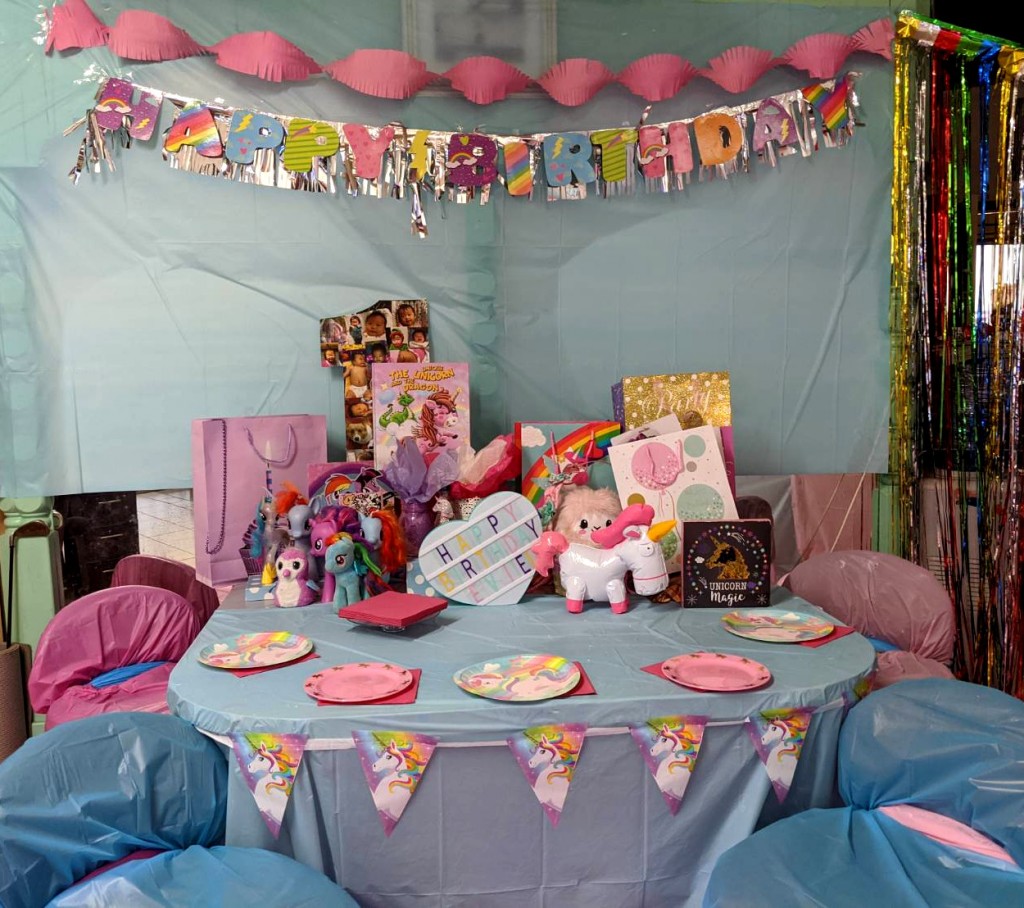 As for the rest of the room, in order to do a complete transformation, I had to cover all the walls and the entry way so I used more plastic table cloths and a rainbow tinsel curtain. I also bought a pack of paper fan medallions to add some interest. 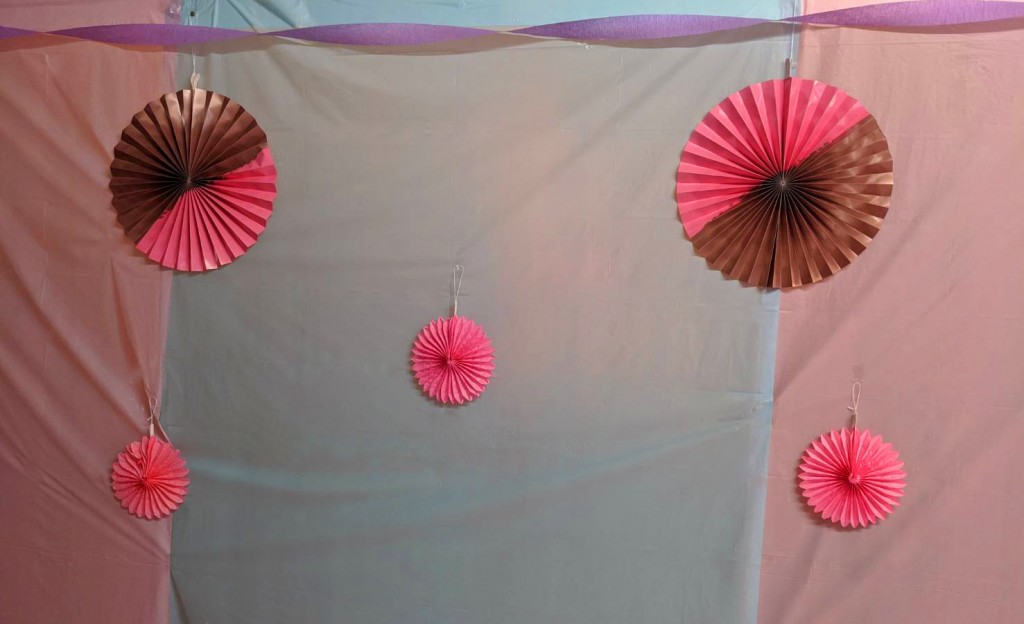 We have really ugly yellow/beige/brown tile floors that I definitely wanted to cover. I was originally going to use a couple of white furry blankets to throw on the floor as rugs but decided at the last minute to buy a couple packs of pink balloons. My wonderful husband waited until my kids fell asleep the night before the party and spent many hours blowing up the balloons with a hand pump until it covered the entire room.

I have to say the entire transformation is pretty magical. 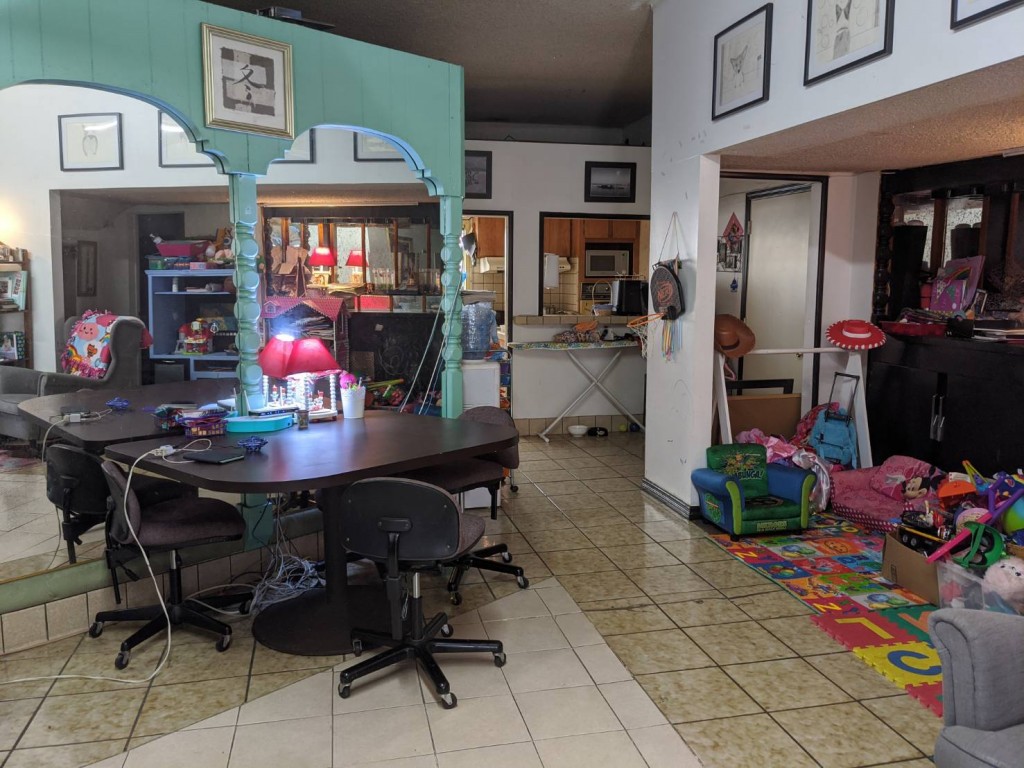 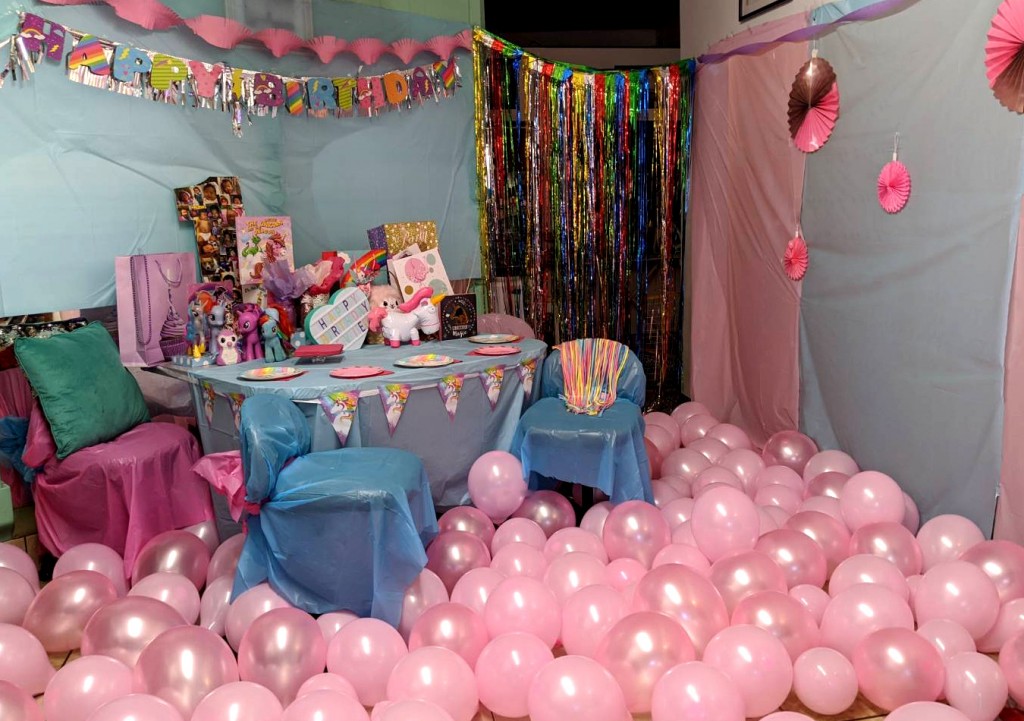 When my kids woke up that morning, they were amazed at the transformation. They were so excited to get dressed and ready for the party. My daughter wanted to wear her new dresses for her party so she just put on her Unicorn Headband and Rainbow Unicorn Wig for pictures. 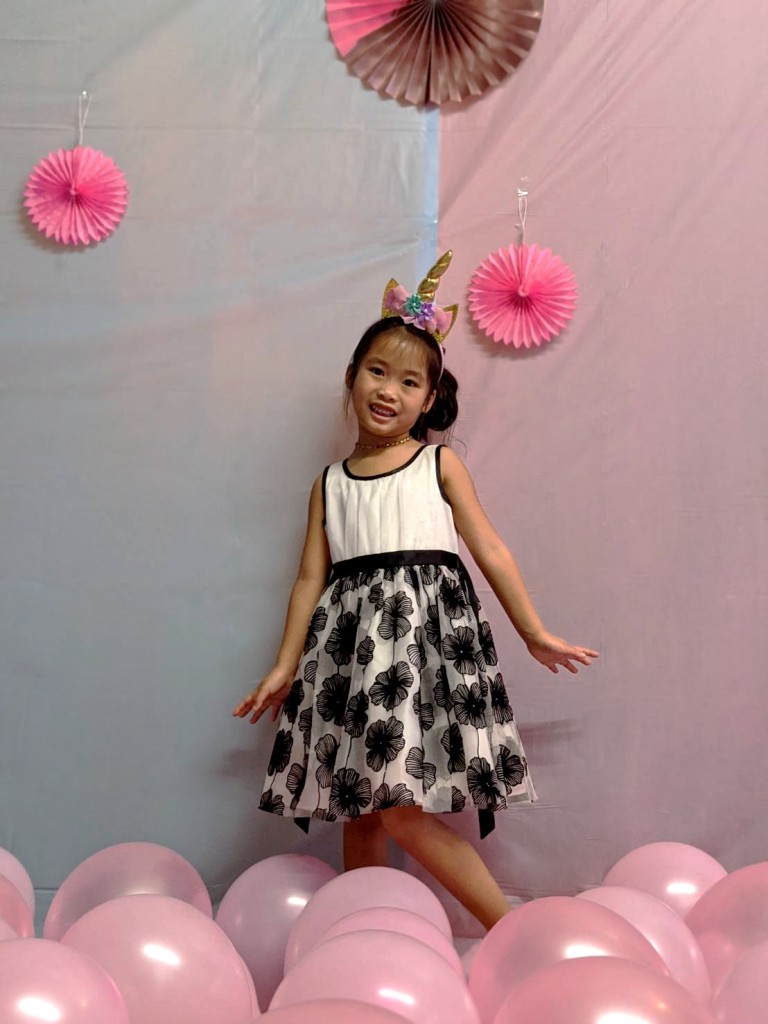 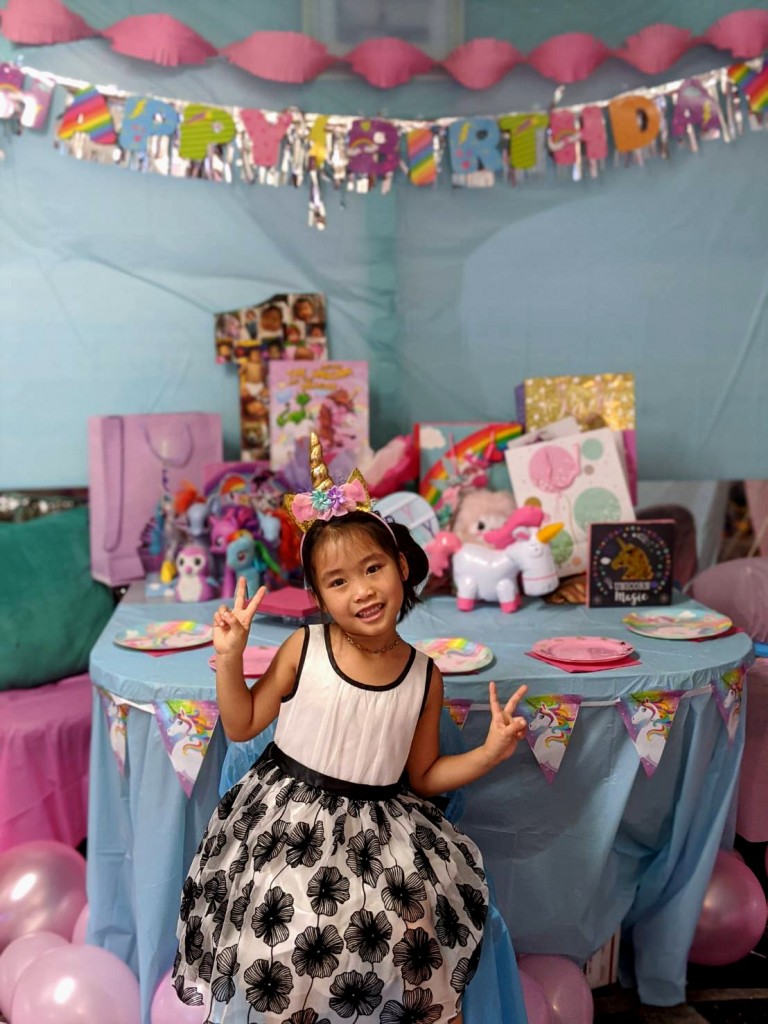 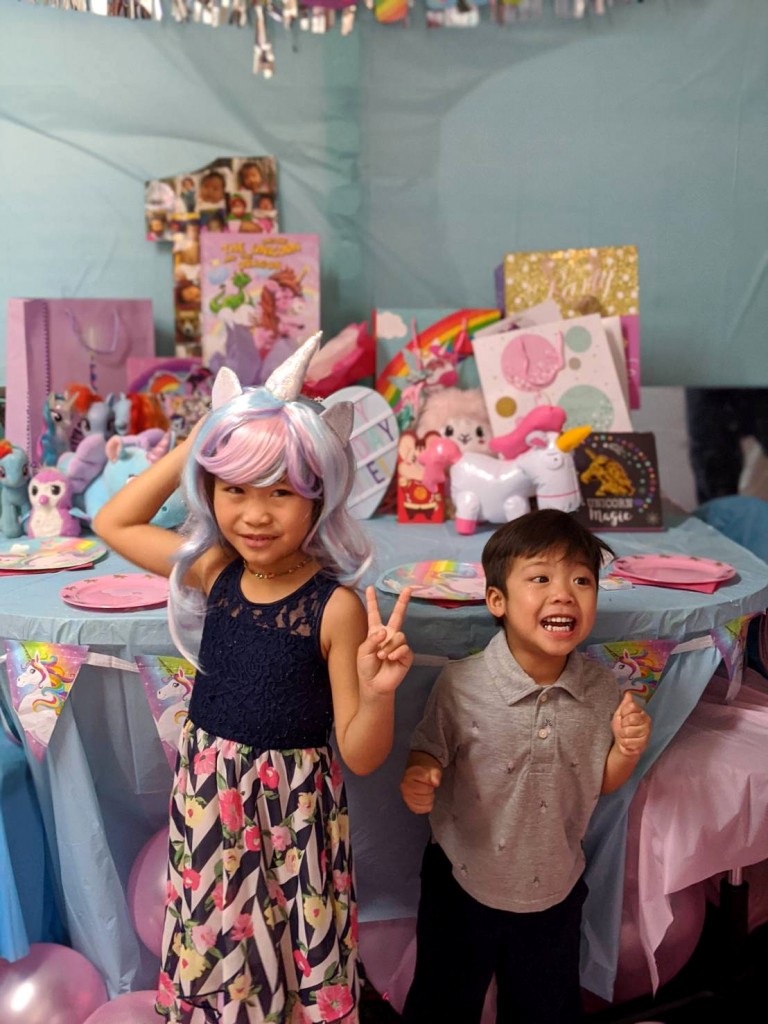 Don’t forget to video chat with friends and family all throughout the day so the birthday person can feel special. Or you can organize a time for drive-by birthday wishes. You can also start a group chat so that everyone can sing happy birthday to the birthday boy or girl all together!

And that’s it for my low budget quarantined birthday party. My daughter had an amazing day and she felt extra special! If I can turn my ugly old apartment that used to be a bar/club in the 1970s into a pastel fantasy world on a budget, anyone can!