It’s a good year to be a Star Wars fan. A new Star Wars game called Star Wars Battlefront II is currently in its beta stage, and the third trailer for Star Wars: The Force Awakens was recently released on YouTube. We’re all excited for the latest film in the franchise, but while we wait for the premiere in December, let’s take a look back at some of the most significant planets that have played a part in the biggest adventure from a galaxy far, far away. 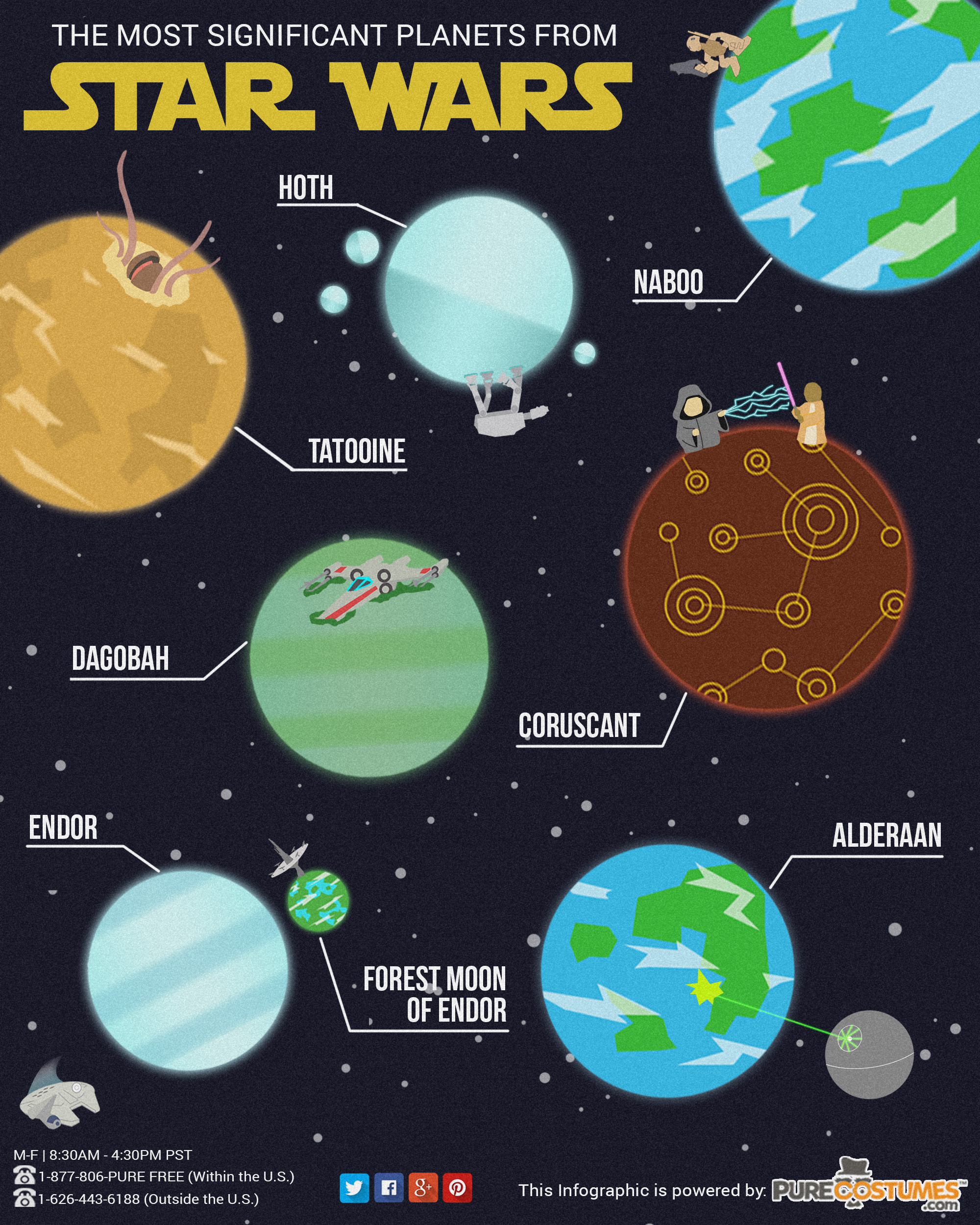 This rich and beautiful planet is filled with large plains, swamps and seas that are littered with all kinds of flora and fauna. It was largely unspoiled until the planet’s plasma resources were opened up to galactic corporations. This plasma resource was highly valued throughout the galaxy, which lead to plenty of conflict during Queen Amidala’s time. Naboo is also the home world of some of the most notable figures that played major roles in the fall of the Galactic Republic and the rise of the Galactic Empire, that is Padme Amidala, Jar Jar Binks, and of course, Emperor Palpatine – also known as the Sith Lord Darth Sidious.

Hoth was once thought to be devoid of humanoid life, since its freezing temperatures and icy mountains were considered dangerous to any life form. This wasn’t the case however, as Luke Skywalker eventually found out after crash landing on the planet’s surface. After getting rescued by Han Solo, Luke recommended Hoth as the Rebel’s new base of operation. Thanks to its remote location and unbearable temperatures, it was a perfect spot for hiding from Imperial probes. That is until it was discovered a year later, which then lead to the famous Battle of Hoth, a major engagement that left a lot of Rebel casualties.

This desert world famous for its two suns was mostly inhabited by poor locals who farm moisture and deal with scraps. The planet had nothing much going for it except for being a cesspool of the galaxy’s worst criminals such as Jabba the Hutt. Even so, this planet still holds a place in our list since it’s the home of some of the most memorable characters from Star Wars – Luke Skywalker and (spoiler alert) his father Anakin Skywalker aka Darth Vader. Aside from that, it also has some of the best and scariest creatures, including the Rancor, the Krayt Dragon and the Sarlacc pit.

Alderaan was a peaceful world inhabited mostly by humans. It was renowned for its wonderful landscapes and refined culture. Perhaps because of the peaceful life of the people on this planet that made it a prime target for the Galactic Empire. In a grand display of its power, and also to intimidate other worlds, Grand Moff Tarkin blew up the planet using the first Death Star’s superlaser. This was Princess Leia’s home, so seeing her home destroyed was devastating to her. But the Empire’s plan backfired, since seeing the destruction of Alderaan drove many worlds to open rebellion and to join the Rebel Alliance.

Dagobah is a remote world covered in swamps and forests. Only a few have traveled on this planet since there isn’t anything notable to be found there. Although there are a lot of different creatures here, no advanced civilization has inhabited this place for a long time. Although at one moment, this served as a refuge for Jedi Grand Master Yoda during his time of exile. Luke Skywalker was instructed to visit this planet by the ghost of Obi-Wan Kenobi, and after arriving he soon discovers Yoda, who trains him in the way of the Jedi.

Coruscant was a very important planet in the Star Wars universe. At various times, this planet has served as the capital of the Republic, the Galactic Empire, and many others. Coruscant was also the home to the Jedi Order, which is until the Great Jedi Purge. This planet was the center of politics, and many of the most influential politicians gather at the Senate District. This was also where a major turning point happened – the announcement for the Supreme Chancellor’s New World Order to the Galactic Senate. And who could ever forget the fight between Jedi Master Mace Windu and Emperor Palaptine? As epic as it was, this is also the moment where Anakin Skywalker turned his back on the Jedi and joined the Dark Side.

Endor and its moon are witness to the end of the Empire and the death of Emperor Palpatine, so of course these two tops our list. The gas giant is found in a remote location, which proved effective in hiding the second death star from the alliance. The forest moon also served as an outpost while the Death Star was being built and the home to the shield generator that protects the second Death Star. In an effort to stop the Empire once and for all, the Rebel Alliance attacks the Death Star with all their forces. Their assault almost failed, but thanks to Han Solo, Leia and the native Ewoks from the Moon, the shield generators were destroyed and the attack on the Death Star was successful – making this planet and its moon the most significant planet in the Star Wars franchise.

We’re sure that when the new movie comes out there will be plenty more interesting planets to add to this list. Until then, we want to know which one you’d like to live on! Let us know by leaving a comment!