When you’re tired of showing up to costumed events dressed as your favorite Disney character or superhero, only to find there are dozens of other people dressed just like you, it’s time to get creative! Whether you’re going to a Disney/Superhero race, or a comic convention, these mashups are perfect to guarantee you have a fun and unique costume! Today’s theme is character’s dressed as heroes!

First we have the most obvious mashup. The Little Mermaid meets The King of Atlantis. Even though she’s one of the daughters of King Triton of Atlantica, Ariel just wants to get out of the ocean and live on land with the people. Aquaman, the King of Atlantis just wants the people on land to leave him and his underwater city alone! That doesn’t stop him for helping the surface dwellers fight for the planet. Dress in Ariel’s signature purple top, mermaid fin, and red hair and add Aquaman’s trident and black tattoos and you’ll be ready to Unite the Seven and be where the people are. 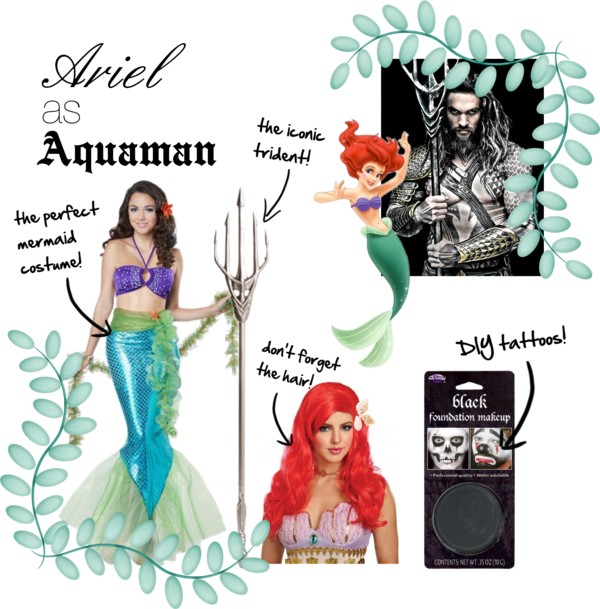 Ariel as Aquaman by purecostumes

Jack Skellington as The Winter Soldier

It’s as if in his attempt to take over Christmas, The Pumpkin King became The Winter Soldier! Both characters can be seen as equal part villain and hero. Bucky Barnes entered the Marvel movie scene as the evil super soldier known as The Winter Soldier, but later it was found he is actually Captain America’s best friend who was brainwashed! Now he fights along side Cap, battling his good side with his evil brainwashed side. Jack Skellington is the king of Halloween, until he decided to give Christmas a try! His takeover of Christmas caused all sorts of problems for children expecting nice gifts, until Jack realized what he was doing was wrong and fought to make it right. Add Jack’s spooky face bat bow tie, and skeleton hands to Bucky’s Winter Soldier uniform for a fun Disney/Marvel mashup. 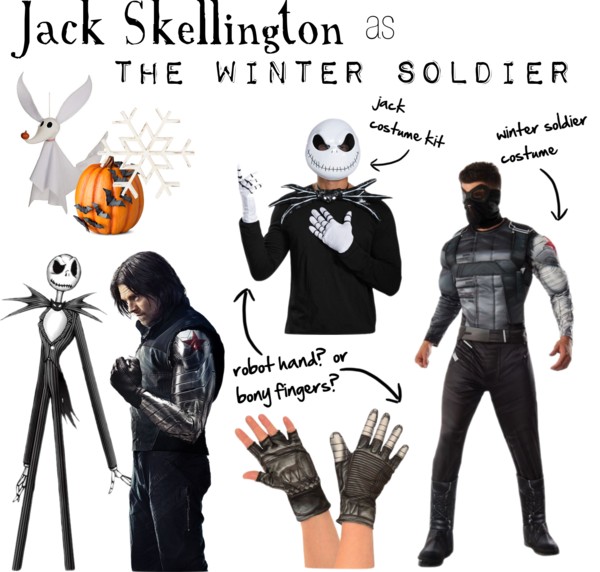 Jack Skellington as The Winter Soldier by purecostumes

Sometimes villains want to take a break from being evil and dress up as the hero. I like to imagine Maleficent would jump at the chance to dress as Gamora because finally there’s a hero with her skin tone! Maleficent was first introduced to us when she cursed Aurora after not being invited to the royal party. Now she has a huge following of people who love her as the pettiest villain in the Disney universe. In 2014, her solo film showed the world that she was more hurt and misunderstood than evil and we all learned to love her more. Gamora is another example of a bad-guy turned good, after this ex-assassin is recruited to help save the galaxy. Match Gamora’s costume with Maleficent’s horns for a mashup that’s out of this world! Choose between Maleficent’s staff or Gamora’s dagger and decide if you want to be a vengeful fairy or assassin turned good. Don’t forget the finishing touch, the green skin that the two characters share. 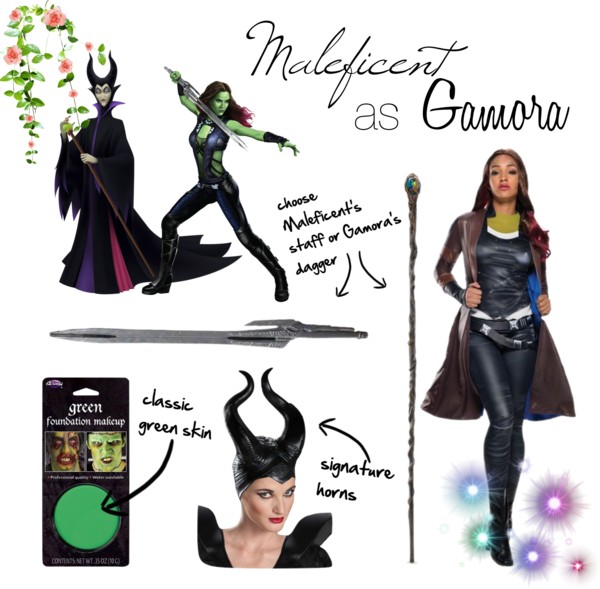 Maleficent as Gamora by purecostumes