Batman…clearly one of the most iconic superhero characters of all time. Whether you are a fan of comic books, movies, video games or cartoons, Batman can do it all. He can fight the forces of evil, solve any crime committed and simply save the day in any situation, all while looking great!

Unlike other superhero characters who have been sporting the same costumes for years, Batman’s appearance is ever changing much like the fashion trends of every season. Although there have been many costume variations for the caped-crusader, each one remains consistent and true-to-type overall, with only slight modifications including color schemes. True to each Batman suit is the cowl, the cape, the obvious “bat symbol”, the utility belt, the bladed gloves, the boots and the briefs.

Since the debut of Batman in 1939, the “bat-wardrobe” is proof that this superhero is capable of functioning not only in any given scenario, but in any outfit as well. Looking good, feeling good and being good, that’s what Batman is all about!

In 1943, the world was introduced to Lewis Wilson, in a new serial, Batman. Hired by the government to take down any villain that was a threat to mankind, this Batman teamed up with Robin and struck fear in bad guys everywhere!

From 1966 until 1968, Adam West portrayed Batman in the television series as part of a crime fighting duo. Summoned by the Commissioner, Batman and his side-kick, Robin would race to the scene and thwart the efforts of a multitude of master criminals.

In 1989, Batman returned to the screen for the first time in years. This time Michael Keaton played the Caped Crusader and then again in 1992, Batman Returns. As a dark and brooding being, Batman sees himself as the protector of Gotham City with a goal of cleaning up the city’s crime by any means necessary.

Val Kilmer is Batman in the 1995 motion picture, Batman Forever with a new set of villains to conquer. Courage now, truth always…

In 1997, we are graced with George Clooney as Batman in Batman & Robin! This time they are in a race against time to stop Mr. Freeze and Poison Ivy from freezing Gotham City while also trying to keep their relationship intact.

Last but certainly not least, we have Christian Bale as Batman from 2005 until 2012 in a total of three films, The Dark Knight Trilogy. We see him transform from an orphan to the savior of Gotham City, all while looking awesome in his Bat-Suit (here)! As you can see, each Batman costume is true to the character with only slight yet sleek and modern changes for each new production. 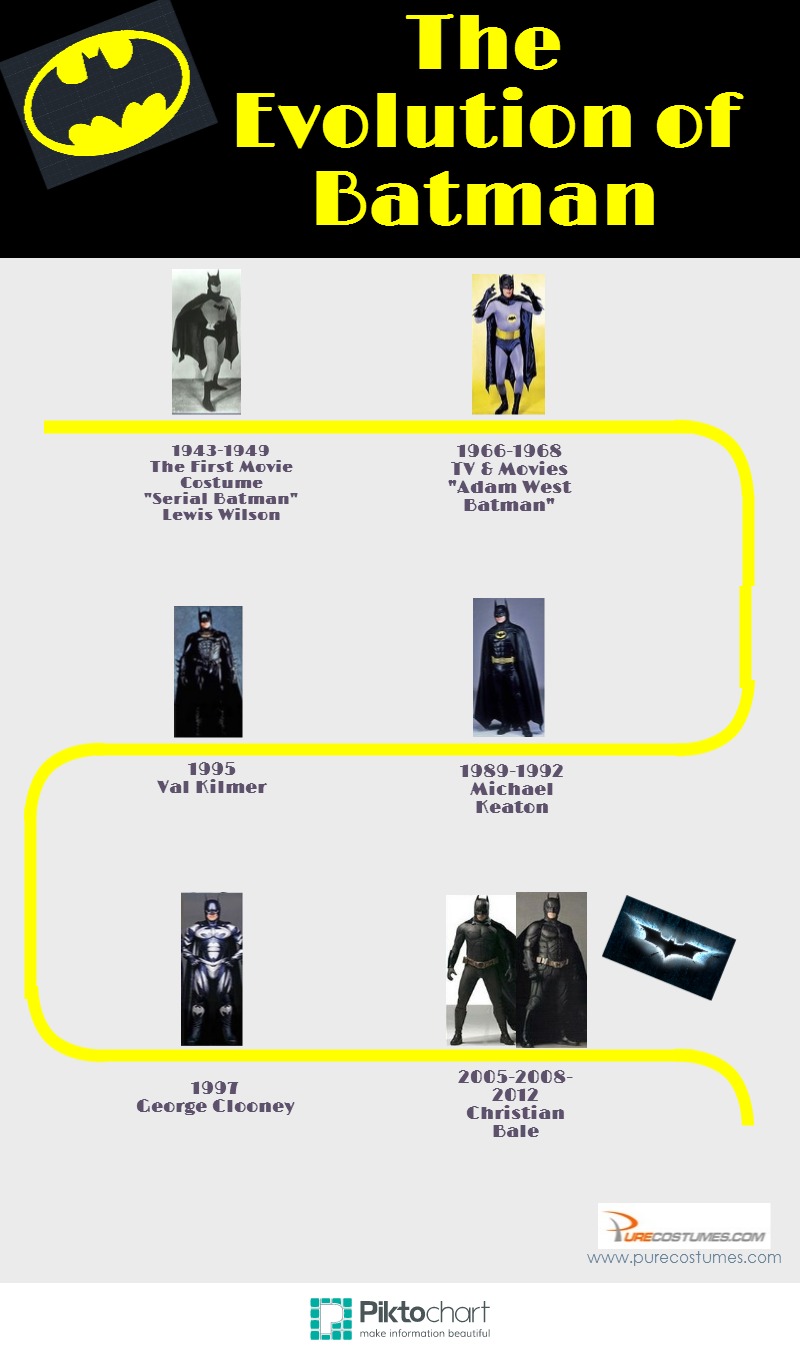 Latest posts by Melissa (see all)