August 10 marks the beginning of one of television’s most anticipated series – Shark Week. Since 1987, the Discovery Channel has hosted a week of some of the most awesome and incredible shark viewings, sightings, and documentaries ever caught on camera. It’s been such a huge event that fans have begun to host viewing parties and today, we’re going to cover how to host one of your own! Check out our Shark Week party ideas to help you plan in time for the festivities! 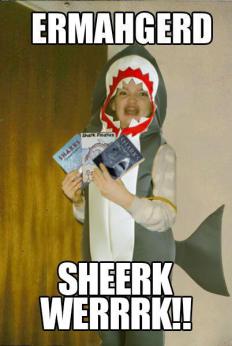 Eat like a shark. For your Shark Week party, it’s only appropriate to plan a menu after the diet of sharks. We recommend a seafood BBQ or bake or sushi for our more adventurous viewers. Better yet, make it a combination to subdue even the hungriest appetite!

Dress like a shark. Add an element of fun to your party with shark costumes or shark-themed clothing. You can turn it into a costume contest to get your guests enthusiastic about dressing up.

Play like a shark. Make your viewing party interactive with some games! Start out with a game that’s similar to a common baby shower game. Every guest start out with a set of shark teeth and a list of words they are not allowed to use while at the party. If the guest gets caught, they must give up one of their shark teeth to the player who busted them. Drinking games and viewing parties are also a popular combination among the 21 and over crowd. For example, every time a shark breaches water, everyone takes a drink. You can find a complete list of rules here.

With these fun and festive Shark Week party ideas, you’ll be ready for the greatest week in television! For more party ideas, be sure to follow us on Pinterest and Twitter. If you have a favorite Shark Week tradition, please share it with us in the comment section below.