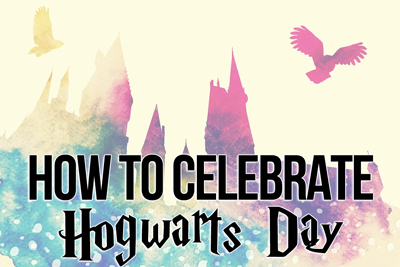 Septembers 1st is internationally known as Hogwarts Day! Why, you ask? It’s the day of year Hogwarts students head back to school! This year’s Hogwarts Day is a special occasion as it’s been 20 years since the Chamber of Secrets was published! Never celebrated Hogwarts Day before? Don’t know how? Here’s a list of a few ways to get into the Wizarding World spirit!

On September 1st, many fans flock to King’s Cross station in London to find a piece of Harry Potter memorabilia in everyday life! Stationed just between platforms 9 and 10, the station has set up a nod to Harry Potter with Platform 9 3/4! You can take pictures and even pretend to drive a trolley full of all your books and supplies through the magical wall! After you take a photo, head to the Harry Potter shop for some cool items from the movie. Of age wizards can head to a couple nearby bars and hotels for special Harry Potter themed elixirs and potions!

If you can’t make it to London to the actual Platform 9 3/4, head to Hogwarts itself in the Wizarding World! Thanks to Universal, you can! Head to Hogsmeade and visit the same shops as the Hogwarts kids or head straight to the castle! Your Harry Potter dreams can come true at Universal Studios Hollywood or at Islands of Adventure! OR get ready for the upcoming school year by heading to Diagon Alley at Universal Studios Florida! Grab your robes and wands and head to one of these three fun parks!

If you can’t make it to London or Wizarding World, chances are your city has a Harry Potter themed restaurant! You can find Harry Potter fans all over the world! If you’re near a big city, you might run across a themed cafe, restaurant, hotel, or bookstore dedicated to the boy wizard and his magical world.

Have a Watch Party

Gather a group of friends and watch The Sorcerer’s (or Philosopher’s) Stone and head to Hogwarts for the first time all over again! If you’ve all seen the movie hundreds of times and want a change, watch some Harry Potter inspired content! Queue up the fan favorite, “A Very Potter Musical“. You’ll have a fun new take on the series with songs you can’t stop singing! Wear your Hogwarts best and whip up some magical treats to snack on during the party!

Whether you’ve read the books over and over, or it’s your first time picking one up, the books are a great way to celebrate Hogwarts Day! Get some alone time and curl up with a book and a warm mug of Butterbeer. Start a book club with friends. Or read the story aloud to the next generation of Harry Potter fans!