Can you believe that Long Beach Comic Con will be here this weekend? A few weeks ago, we challenged Southern California cosplayer, Super Batboy Cosplay, to create a totally new costume out of an existing one. He jumped right in to the challenge by attempting to transform a simple black bodysuit into a Black Suit Spider-Man costume. After weeks of working on this project, Super Batboy Cosplay has come back with the final look and here it is. Plus, he’s shared with us his experience in creating this look which he plans to wear to the Long Beach Comic Con where he will be featured on a panel. 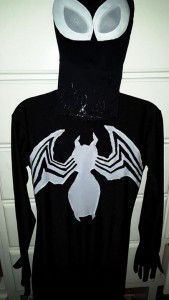 Q: What type of modifications did you do?

The modifications that I did were minimal. I had to give the suit a couple of washes and put in the dryer a couple of times to get the suit to fit me better. Then I cut some eye holes in the hood.

Q: How did you make the spider emblem? It seems like it would be difficult to create something with such an irregular pattern.

In order to create the spider pattern, I drew out a template on some hard paper, close to the stiffness of cardstock. I made the pattern so that the spider can wrap around the torso from one side to the other. When I had to sew it on, I pretty much put ALL of my pins to keep it properly centered. 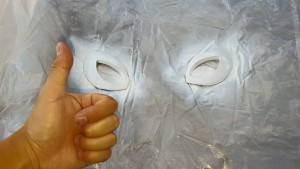 Q. What type of materials did you use on this costume? Those lenses look pretty legit.

The material that I used for the spider pattern was a 4-way stretch white spandex. As for the lenses, I went the cheap route. With fall semester, I had to save money for classes. I went to my nearest Target and purchased the Iron Spider mask from the Spider-Man toy section of their toys department. Then, I proceeded to cut out the smooth lenses and spray painted them white. Once the paint was dry, I covered them with a white mesh fabric twice. I attached the lenses using both fabric glue and hot glue onto the suit’s hood.

Q. That’s a really clever trick. What challenges did you encounter in making this look?

As for challenges, the real challenge was pinning the spider pattern onto the suit. I don’t have a mannequin to fill out spandex, so it took some trial and error to get it right. Upon finishing the suit and putting it on for a test fitting though, the sides of the back spider did not line up perfectly. But I brushed my mistake off. This was probably my most challenging sewing experience with a pattern. 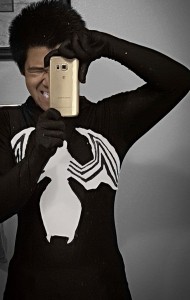 Q. Do you have any additional tips for someone who might try to recreate this look?

The only tip that I have to anyone who wants to make a Spider-Man suit is to have A LOT of patience. Sewing a spandex pattern onto a premade spandex suit is in fact quite difficult, but don’t let that scare you. I believe making the entire outfit from scratch would have proven to be a little more difficult for me. In terms of having a pre-made spandex suit, I saved a lot of money on fabric, but most of all, time. I should have made the spider emblem bigger and not cut one of the sides.

We’re so impressed by the final look and the creativity in which this costume was created and want to give a big thanks to Super Batboy Cosplay for taking on this challenge. If you want to catch him at the Long Beach Comic Con, you can find him on the Cosplay 101 for Beginners Panel on Saturday, September 12th, at 10:00am and follow all of his cosplay adventures on Facebook!

Let us know what you think about this look and leave us a comment below!